This field of sleep disorders and treatment can be overwhelming. It is our goal to provide you with the knowledge and resources to make it simple.

Obstructive Sleep Apnea is the “big guy” that gets all the press. OSA is when a person is actively trying to breathe, but there is an obstruction that is preventing air from getting into the lungs. This can be the Uvula, Tongue, or the upper airway collapsing. It isn’t the same for everyone, but the result is the same.

Eventually the blood oxygen levels (SpO2) drops, heart rate spikes, and the patient will wake gasping for air. Often the awakening isn’t remembered and they go right back to sleep only to repeat this repeatedly throughout the night. This can be successfully treated with CPAP.

Below is a one minute picture of Obstructive Sleep Apnea. The belts that are around the chest and abdomen are still moving indicating they are trying to breathe. “Flow” is the sensor that shows breathing. Near the end of this page you see the snore signal increase, the C3,C4,O1, and O2 signals speed up, and the Chin electrodes (EMG2-EMG3) increase. The breathing also resumes at this point. The oxygen level drops 4%.

The next image is a two minute window showing Obstructive sleep apnea as well. Click on the image for a faster loading, but grainy picture. Or click on the Blue icons for the same picture in a much higher resolution. Keep clicking on the images to enlarge. Below we even have a video to help explain what is going on.

Central Sleep Apnea, or Central Apnea (CSA) is when all respiratory channels are flat. Like all other apneas the person isn’t breathing. What makes Central Apneas interesting is that the chest and abdominal belts aren’t moving either indicating that the patient isn’t even trying to breathe. So the airway is clear and open, yet they aren’t breathing.

Gasping for air at arousals with Central Apneas are rare since the airway is open. Waking from Central Apneas is less frequent than other apneas. The patient will typically remain asleep, but there can still be dramatic blood oxygen desaturations and resaturations. This still stresses the heart and will usually result in a nasty headache in the morning. This can be successfully treated with CPAP, BiPAP, or Auto BiPAP Servo Ventilation.

Below is a one minute example of Central Sleep Apnea. The PTAF (breathing sensor) Chest, and Abdomen channels are all flat indicating this is a Central Apnea. The C3,C4,O1, and O2 signals speed up, and the Chin electrodes (EMG2-EMG3) increase. The breathing also resumes at this point as do the chest and abdominal movements. The oxygen level doesn’t desaturate that much in this example. 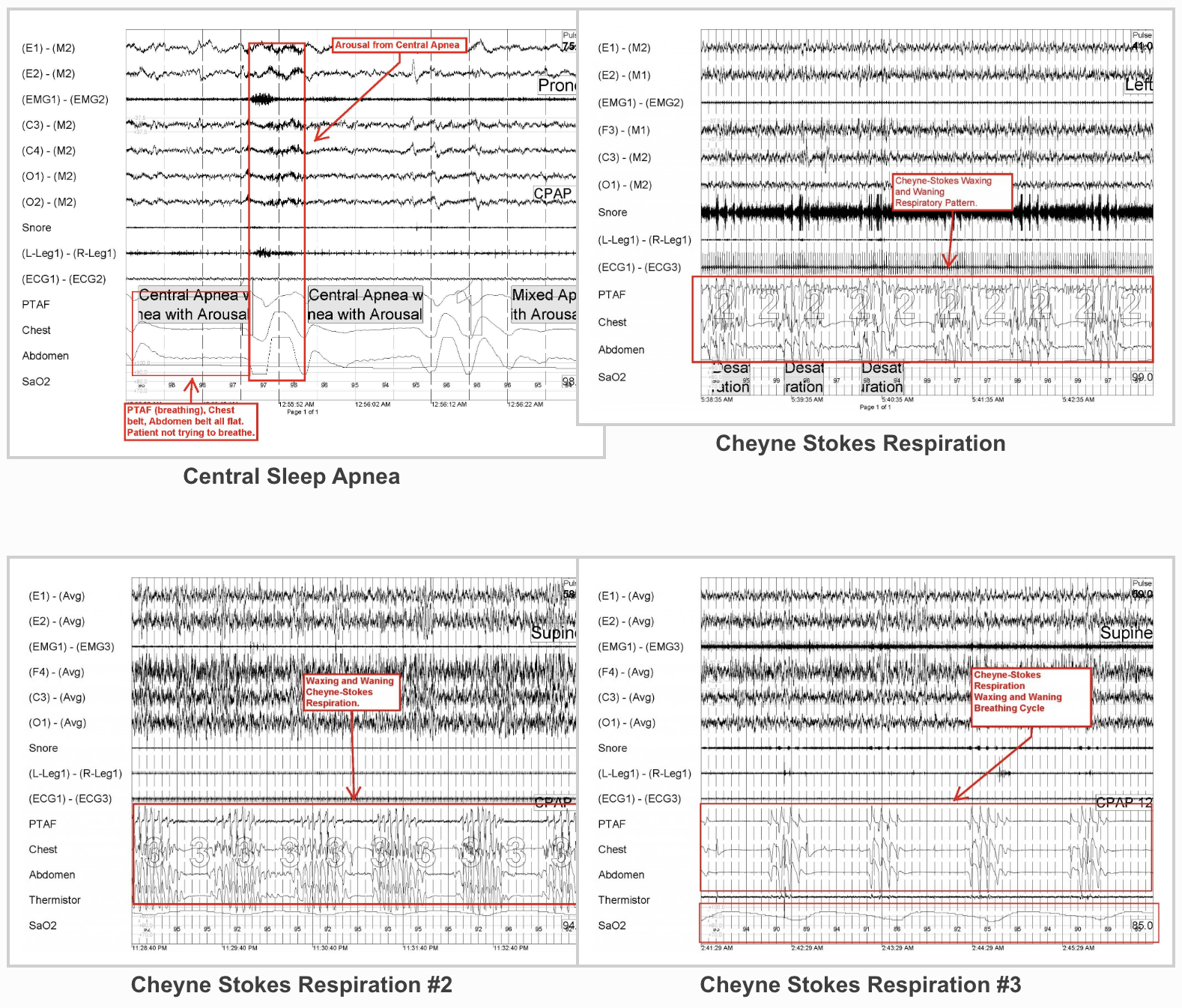 Also included in these are some examples of Cheyne Stokes Respiration. Cheyne-Stokes Respiration is one aspect of Central Sleep Apnea. There is a waxing and waning cycle to the breathing that continues for ten minutes or more. During the sleep stage REM (when you are dreaming) this breathing pattern disappears. This is most common in older males and is treated very well with BiPAP Auto SV. This is like a hybrid ventilator that shuts off when the patients is breathing on their own, and turns on to the appropriate pressure when when the patient isn’t breathing on their own. Basically, the machine waxes and wanes the exact opposite of the patients breathing pattern. See the example of Cheyne-Stokes above. There is a video below explaining the treatment for Cheyne Stokes Respiration (CSR) as well as some others on the subject.

Speak with a Sleep Technologist about your questions about CPAP, APAP, Bilevel, or ASV Therapy.

At home diagnostic sleep testing equipment rental for testing in your own home.

Finding the proper CPAP mask for your sleep disorder diagnosis can be hard. Find the best mask for you.
READ MORE

We are here to help you with any of your sleep diagnotics needs. From at home sleep testing, to CPAP assistance, to sleep advice, we are happy to help you in any way we can. Questions about our services? Please don’t hesitate to contact us.

We use cookies on our website to give you the most relevant experience by remembering your preferences and repeat visits. By clicking “Accept All”, you consent to the use of ALL the cookies. However, you may visit "Cookie Settings" to provide a controlled consent.
Cookie SettingsAccept All
Manage consent

This website uses cookies to improve your experience while you navigate through the website. Out of these, the cookies that are categorized as necessary are stored on your browser as they are essential for the working of basic functionalities of the website. We also use third-party cookies that help us analyze and understand how you use this website. These cookies will be stored in your browser only with your consent. You also have the option to opt-out of these cookies. But opting out of some of these cookies may affect your browsing experience.
Necessary Always Enabled
Necessary cookies are absolutely essential for the website to function properly. These cookies ensure basic functionalities and security features of the website, anonymously.
Functional
Functional cookies help to perform certain functionalities like sharing the content of the website on social media platforms, collect feedbacks, and other third-party features.
Performance
Performance cookies are used to understand and analyze the key performance indexes of the website which helps in delivering a better user experience for the visitors.
Analytics
Analytical cookies are used to understand how visitors interact with the website. These cookies help provide information on metrics the number of visitors, bounce rate, traffic source, etc.
Advertisement
Advertisement cookies are used to provide visitors with relevant ads and marketing campaigns. These cookies track visitors across websites and collect information to provide customized ads.
Others
Other uncategorized cookies are those that are being analyzed and have not been classified into a category as yet.
SAVE & ACCEPT